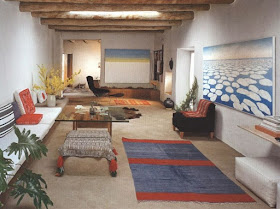 In 1929 Georgia O’Keeffe travelled to Taos at the invitation of friends Dorothy Brett and Mabel Dodge Luhan. It was there she first heard of Ghost Ranch and once even caught a tantalizing glimpse of it from a high plain. In 1934 she finally visited the Ranch but was dismayed to learn that it was a dude ranch owned by Arthur Pack and Carol Stanley. However, a place was available for her that night in Ghost House and she spent the entire summer at the Ranch.

This established a pattern she would follow for years, summers at Ghost Ranch exploring on foot and on canvas the beauty of the place, winters in New York. Because she was basically a loner, she sought lodging at the Ranch that was somewhat isolated from the headquarters area. Pack offered to rent her his own residence called Rancho de los Burros. This suited her very well.

One spring O’Keeffe arrived unexpectedly and found someone else lodging at Ranchos de los Burros. Feeling a sense of ownership, she demanded to know what those people were doing in her house. When Pack pointed out that it wasn’t her house, she insisted that he sell it to her. Thus, in 1940, she became the owner of a very small piece of Ghost Ranch land: a house and seven acres. (In later years she told a Ranch employee doing roadwork near her home, “I wanted enough land to keep a horse–all Arthur would sell me was enough for my sewer!”)

But Rancho de los Burros was a summer place and also a desert one. O’Keeffe wanted a garden and a winter home. Eventually, she bought three acres in the village of Abiquiu with a crumbling adobe home. She spent three years remodeling and rebuilding the house before it was fit for human habitation. After her husband, Alfred Stieglitz, died, O’Keeffe left New York to make Abiquiu her permanent home.

From The Ghost Ranch 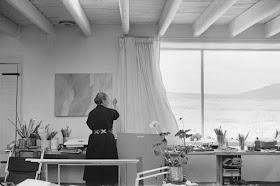 The Images i have used are from a variety of sources to try and give a good overview of the property. Please click on the links below the images for the source

Thank you for leaving a comment on Moon to Moon, Spam will be removed
xx Gabi xx